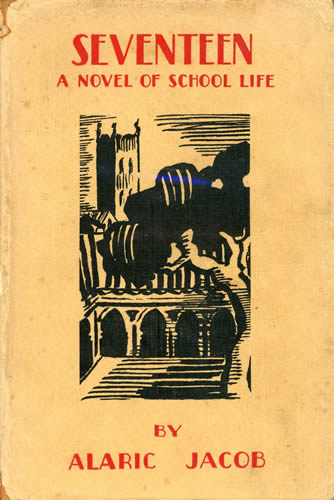 Jacob noted: “Seventeen bears its name because it is by a seventeen-year-old about seventeen-year-olds. I state this in explanation – not in excuse.” The novel is thus of unusual interest as a contemporary picture of life in the ‘Commoners Yard’ at the school he calls ‘Furlington’ in the 1920’s.

“The boys streamed out into Commoners Yard – the rectangular plot long since denuded of grass, around which, five centuries ago, the monks of Furlington built the grey stone buildings of the great school. In those days, as now, Commoners Yard was the centre round which the panting life of the school ebbed and flowed. Then, as to-day, you walked in the Yard, ate, played, fought in it, ran fearfully across it on the way to a monitor’s study, stalked across it arm in arm with bright-blazered friends, to take afternoon call-over in Big School.”

Jacob later wrote an autobiography – Scenes from a Bourgeois Life (1949). Under the thin disguise of ‘Cheriton’, Jacob gives an unflattering description of the School, and of its Headmaster, Algernon Latter:

“Cheriton had once been a fine foundation, and may be so again, but at this time it had little to recommend it beyond the faint literary flavour deriving from the fact that it had once sheltered Marlowe, Pater, Somerset Maugham and Hugh Walpole. The headmaster, mutilated by an enormous moustache that made him look like a despondent walrus, had almost no contact with the contemporary world. Virgil and Wisden’s Almanac blocked the door of his mind, letting little else through. He died without hearing of Marcel Proust.”