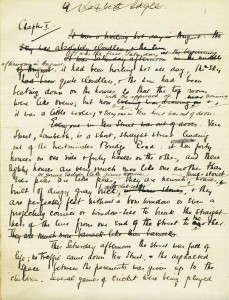 The novel was probably written in 1895, after Maugham’s first short stories (later published in Orientations) had been rejected by Fisher Unwin. In sending the manuscript of his first novel to Unwin on 14 January, 1897, Maugham wrote: “In the early part of last year, I sent you two little stories, and you in returning them for their excessive shortness suggested that I send you something longer. Herewith I send you a novel which you may think suitable for publication. It has nearly forty-two thousand words, so I imagine it would not be too short. I do not know whether it has ‘the greater literary interest’ which you mention in your letter.”

The original title was ‘A Lambeth Idyll’ by William Somerset. (The book was intended for the Pseudonym Library.) It is written in three exercise books, of different sizes, which were bought from Papeterie F. Brocchi, 30, Faubourg Saint-Honoré, Paris. The shop was exactly opposite no. 54, where Maugham’s father had his office near the British Embassy. The first volume has pages 1-84; the second pages 85-148; and the third pages 149-212. The last few pages had been lost, but were re-written by Maugham on six loose sheets. A note reads: “The last four pages of this MS. written on loose sheets have vanished in the course of the years, so to complete it I have re-written them. 15 July, 1931. P. S. This novel, my first, was written in 1895 at 11 Vincent Square, Westminster. W. Somerset Maugham.”

Maugham presented the manuscripts of Liza of Lambeth and Catalina, his first and last novels, to the School in 1948.