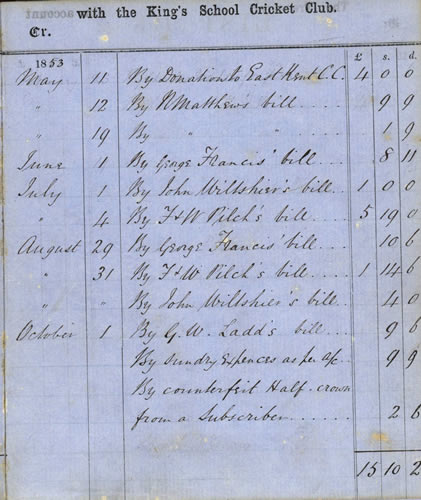 The Games Book covers the years 1852 to 1881. It contains the accounts of the King’s School Cricket Club and the King’s School Foot Ball Club. (Foot Ball was, of course, the School’s early version of Rugby Football.) There are also a few references to hockey.

Games in this period were organised and financed by the boys themselves. A preface to the Book therefore reads: “Canons observed from Time Immemorial: That for the support of the Games and Foot-ball, every Boy in the School pay the stipulated Subscription.” Even aesthetes such as Walter Pater duly paid their 5s.

Although occasional games of cricket were played on the Green Court (and the references in the accounts to the glazier’s bills suggest that windows were sometimes broken), the School used the ground of the Beverley or East Kent Club in the Old Dover Road. The ground is now known as the St Lawrence Ground and Kent play their matches there.

The bills to F & W Pilch noted here were to Fuller Pilch and his nephew William. Fuller Pilch had been the greatest batsman in England in his day and William also played for Kent. These two were responsible for coaching and umpiring matches.