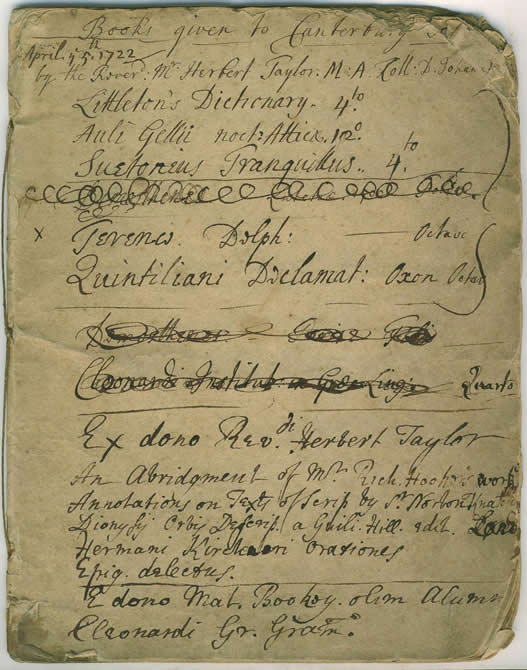 It was probably in 1702 that the Headmaster David Jones established a Library for the scholars of the King’s School. Before then they used the Cathedral Library, or books belonging to the Headmasters or Lower Masters. The eighteenth century collection (much of which survives, including the early catalogue shown here) consisted almost entirely of the Classics along with two or three lexicons. In 1830 the scope was broadened when an ‘English Library’, including books of general interest, was founded.

Over the centuries the Library was housed in various locations in the Mint Yard. In 1938 it moved into a new home in the former Schoolroom. It remained there for over fifty years, expanding into the adjoining Durnford Library which housed the History section.

The Library was designed by William Butterfield to complement the surrounding medieval buildings, and opened with the rest of St. Augustine’s College on 29 June 1848. It then housed 19,000 theological volumes. Over the years interior refurbishment was undertaken by the College through the generosity of dioceses around the world, as indicated by the plaques on the shelves.

The School also houses the Somerset Maugham Library on the main School site, and the Hugh Walpole Collection of English literary manuscripts.