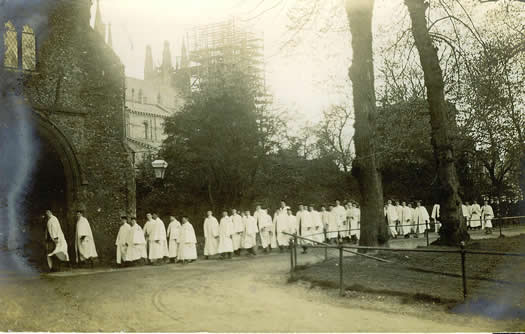 King’s Scholarships were established in 1541 by Henry VIII under the Statutes of Canterbury Cathedral. Chapter XXVII of the statutes, entitled ‘Of the Grammar Scholars and their Teachers’, begins:

“To the end that piety and good learning may in our Church for ever grow and flourish, and in their season bring forth fruit to the glory of God and to the benefit and honour of the Commonwealth, we do appoint and ordain, that … there will always be in our Church of Canterbury fifty poor boys, both destitute of the help of friends, and endowed with minds apt for learning, who shall be called scholars of the grammar school…”

Scholarships were originally awarded for four years, with, later, the possibility of a fifth ‘year of grace’. It was expected that Scholars should continue to deserve the award:

“But if any one of the boys be remarkable for extraordinary slowness and dullness or for a disposition repugnant to learning, we will that he after much trial, be … expelled and sent elsewhere, that he may not like a drone devour the honey of the bees.”

The most recent Royal Charter, granted in 1992, formally approved the admission of girls as Scholars.

King’s Scholars are members of the Canterbury Cathedral Foundation. Some privileges follow: for example the Scholars are represented at the Enthronement of an Archbishop.