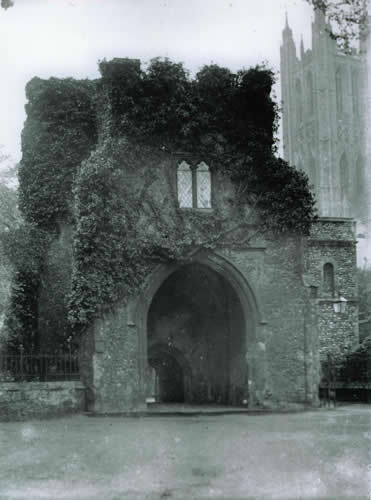 The Dark Entry forms the link between the Green Court and the rest of the Precincts and the Cathedral. It was built in the late 14th century. It used to be known (incorrectly) as Prior Sellinge Gate.

The Dark Entry is supposed to be haunted by the ghost of Nell Cook. R.H. Barham in The Ingoldsby Legends  recounts ‘A King’s Scholar’s Story’ about a Canon in ‘bluff King Harry’s days’ and his cook. Nell is buried alive and haunts the Dark Entry:

“But one thing’s clear – that all the year on every Friday night,
Throughout that Entry dark doth roam Nell Cook’s unquiet Sprite…

And whoso in that Entry dark doth feel that fatal breath,
He ever dies within the year, some dire, untimely death.”