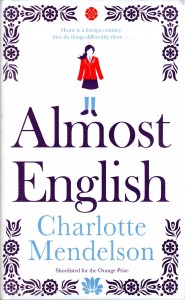 Charlotte Mendelson’s 2013 novel was longlisted for the Man Booker Prize. It was her fourth work, following Love in Idleness, Daughters of Jerusalem and When We Were Bad.

The central characters are the sixteen year old Marina Farkas and her mother, Laura. Marina joins Combe Abbey, a mainly boys school, as a sixth former in 1988 and much of the book concerns her time there.

Combe Abbey has features that may remind some readers of the King’s School of this period. Marina is in West Street (a house ‘just outside the school grounds, reached via a narrow passage beside Bute House’); there is a Founders Day Week of plays and concerts, etc.; drama is ‘spectacularly lavish'; and there is an Old Combeian Society (OCS). Several chapters start with entertaining extracts from the school calendar.