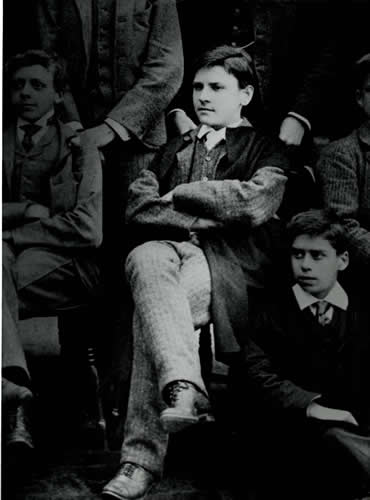 Somerset Maugham in the Fifth Form 1889

In Somerset Maugham’s novel Of Human Bondage (1915) Philip Carey goes to the King’s School, Tercanbury. Maugham was at King’s from 1885 to 1889. He was later a Governor and a significant benefactor. He is buried in the garden below the Maugham Library.

“The masters had no patience with modern ideas of education, which they read of sometimes in The Times or The Guardian, and hoped fervently that King’s School would remain true to its old traditions. The dead languages were taught with such thoroughness that an old boy seldom thought of Homer or Virgil in after life without a qualm of boredom; and though in the common room at dinner one or two of the bolder spirits suggested that mathematics were of increasing importance, the general feeling was that they were a less noble study than the classics.

“Neither German nor Chemistry was taught, and French only by the form-masters; they could keep better order than a foreigner and, since they knew the grammar as well as any Frenchman, it seemed unimportant that none of them could have got a cup of coffee in a restaurant at Boulogne unless a waiter had known a little English. Geography was taught chiefly by making boys draw maps, and this was a favourite occupation, especially when the country dealt with was mountainous: it was possible to waste a great deal of time in drawing the Andes or the Apennines.

“The masters, graduates of Oxford or Cambridge were ordained and unmarried… and they were now all men of middle age.”