We had no Blue Book, but as the School numbered only 180 boys it was easier, I suppose, to pick up from others what we might or might not do. There was very little we were prohibited from doing, and we could go almost anywhere, except for some reason through Butchery Lane. Having bicycles, we could roam wherever time permitted and it was not difficult to get leave off roll-call at 4 p.m. on half-holidays, which was taken by the duty Monitor from the steps of what in our day was the ‘Schoolroom’ and now is the School Library. From these steps Colours were awarded, for there was no Memorial Court then, nor had the lower portions of the columns below the Arches been excavated to provide the sunken court.

The whole School assembled form by form in the Schoolroom for prayers each morning at 8.30, the Sixth Form congregating upstairs in the ‘Rabbit Hutch’, from where a watch was kept for the procession of Masters emerging from the Headmaster’s study in what is now Galpin’s House, with the Headmaster, then Dr. Galpin himself, bringing up the rear. Thereupon the Sixth emerged from their eyrie and took their places in the Schoolroom, the rest of the School rising to their feet, while the Masters went to their seats, the Headmaster to his stall at the end of the room facing the door, the Captain of the School sitting in a chair on his right, the House Monitor and the other Monitors sitting on the bench forming part of the wall behind him on his left. 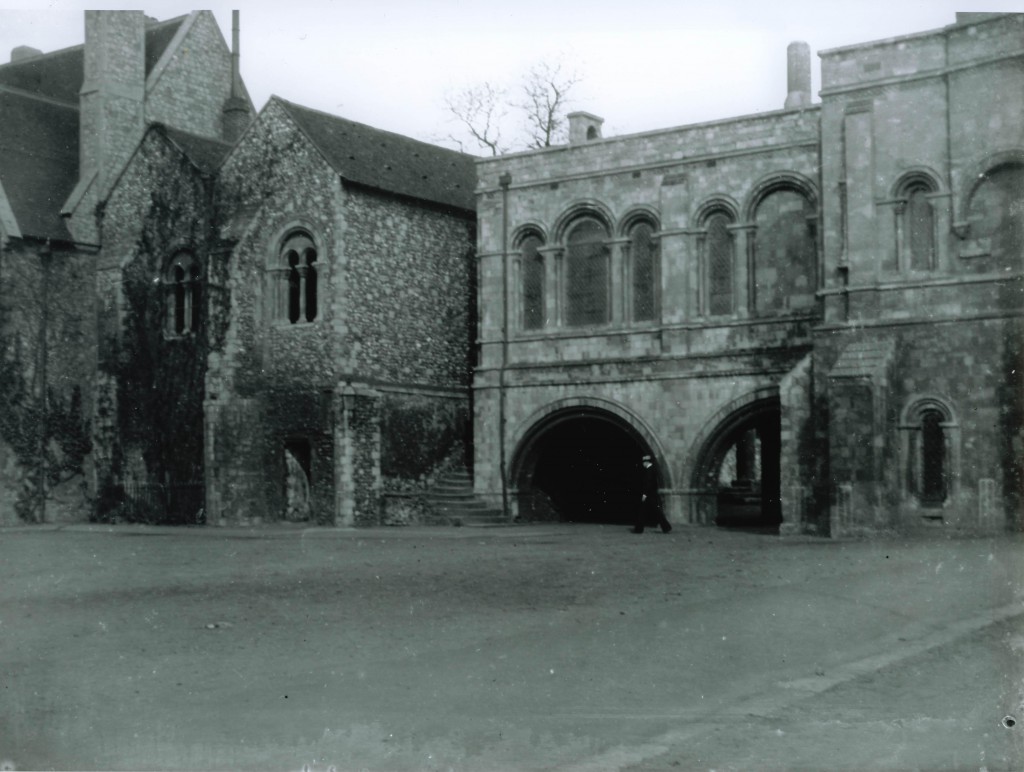 The Mint Yard. The stumps for stump cricket can be seen, marked in chalk, to the right of this photograph.

Before mid-day dinner on a whole-school day in summer, stump cricket was played in the Mint Yard, with a ball larger and softer than a fives ball, obtainable from ‘Mrs. H.’ or ‘Miss H.’ at the tuckshop under the Arches where now the little Chapel is. The ground­floor windows overlooking the Mint Yard were covered with wire mesh to prevent breakage, but this did not apply to the windows outside in the Borough, where an awesome crash of broken glass sometimes followed a mighty hit for six by First Eleven stalwarts, and an unfortunate small boy had to retrieve the ball from a shop or the Nonconformist Chapel. The conversion from asphalt to grass has immeasurably improved the appearance of the Mint Yard, but who shall say that the high scoring at cricket in our day was not in some degree the result of the practice the First Eleven batsmen got from hitting the ball at stump cricket – Bassett in 1907 averaging 55 for an aggregate of 835 runs, and Gardner in 1908 averaging 61 for an aggregate of 1,168.

Drop-kicking, too, in the other two terms, from one end of the Mint Yard to the other, was very popular, and even a junior boy, if he was lucky enough to field the rugger ball when kicked from the other end, was allowed to kick it back. ‘Touching down’ secured the return kick, and we operated in “syndicates”.

First Colours were, like today, cheered on entering (the Schoolroom) the morning after a successful match, in which respect they enjoyed more frequent praise than did noted scholars, who were cheered (though then very heartily) only when they had won a University Scholarship. The Sixth, who alone carried walking-sticks, were allowed to walk across the Green Court, vaulting the iron rail then surrounding it, and they were also permitted to sit in the enclosed Baptistry garden, to which the key was kept in the Grange study, the home of the Captain of the School and of two other Monitors, the only study with an open fire­place.

At the time of which I write, the School, except for the small Holme and Langley Houses in the town, consisted only of the School House, itself divided into two parts, one portion being the Grange. I have a feeling, pace the Blue Book, that the respect still accorded to the Grange stems from its having been the home of the Captain of the School rather than of its having housed the Scholars, for the Senior Scholars were in Studies on the Headmaster’s side of the Mint Yard, and only the younger Scholars, Probationer or Junior, not old enough for a Study, had their being in the ‘New Hall’ on the Grange side. Scholars did not have to fag.

I recently came across a journal kept by my father in which is pasted the statement of my first term’s account at the School dated September, 1905. Incredibly the bill reads:­

With a Senior scholarship replacing the Probationer, the last years at School cost my father less than £40 per annum.

Few boys in our day had much money. Weekly pocket money for most was sixpence or a shilling a week, and though the Tuck Shop prices were low – a boiled egg cost, I think, twopence and Miss H. brought them up to the Old Hall at six o’clock tea-time – it was easy to run out of cash for ‘cocoa study’ long before the end of term. (However, a 7 lb. basket of strawberries in the height of summer cost only ½d.)

I must mention our early morning routine. The first bell went at 7.10 a.m. No one took any notice of it. It rang again at 7.40. We leapt from our beds and rushed downstairs, washed face and hands with soap and water in the basins, and then plunged, summer and winter, into baths of cold water, everyone using one of two baths which stood ready filled. Then away, up the stairs again, drying ourselves as best we could, to get our clothes on before the final bell went at 7.45. With socks clutched in our hands and ties perhaps un­fastened, we hurried to our places by the breakfast tables in the Old Hall, trying to finish dressing without attracting the notice of the Headmaster as he entered by the door from his house, to read the call-over from near the door by which we had entered, and through which, as their names were read out, came the Monitors. “Strahan, Deighton, Moore, Pinsent, Scott, Dibben, Townend primus, Richards”, the last-named being the Captain of the School; these were the names in my first year.

Pinsent was the boy who performed the almost incredible feat (quite impossible nowadays?) of winning his Senior scholarship at School in Classics, then turning over to Mathematics, to gain a top Scholarship at Trinity, Cambridge, and later winning first place in the Civil Service examination with an almost cent per cent mark in his Maths. papers – 1,136 out of 1,200 in Higher Maths!

Senior Scholars wore long black gowns of thin material. Juniors and Probationers wore short black woollen gowns. Seniors and Juniors had purple tassels to their mortar-boards, Probationers black tassels. On ceremonial occasions the Commoners wore black top-hats. The School went to Cathedral in procession, two by two, led by the Scholars in their surplices, the younger boys first, all forming up beforehand round the Green Court. (Up to 1905 the Commoners, like the Scholars, took part in the procession inside the Cathedral, preceding the Clergy.)

At other times the traditional bi-coloured straw hat, of stouter construction than today’s, was worn by all, with black coats and striped trousers. The younger boys wore Eton collars, the older boys single upright collars, from which the tie – black for everyone except the Sixth and those entitled to wear Sports Colours – easily escaped, unless restrained by little gold clips set on the bottom edge of the collar on either side. About the year 1907 the ‘butterfly’ collar came into vogue and ousted the plain upright collar, so now the tie could no longer (in the current phrase of the day) “get the better of” the wearer, especially if threaded through a loop at the back of the shirt: present generation please note.

Performers on Speech Day wore white tie and tails, but there were no purple gowns. The routine was not unlike today’s, the Speeches finishing with rounds of cheers by the School for the Dean and Chapter, the visitors, the Headmaster and the Masters. With no Assembly Hall, the Speeches were held in the Cathedral Chapter House, then a very unfamiliar place to most of us, for the Cloisters were not normally open to visitors. The Cathedral had railings everywhere, with gates which had to be opened by vergers at a charge of sixpence a head (except for King’s School boys). The Crypt was virtually unused, but for the Huguenot Chapel.

Cathedral service (‘Cath’) was on Sunday mornings and Saturday afternoons, as well as on Saints’ Days, in the Choir, and on Sunday evenings in the South Transept, which was the School’s own Chapel. On one memorable evening, Dame Clara Butt attended School service with her husband, Kennerley Rumford, also a noted singer and an O.K.S., and Percy Godfrey, the music master and organist, signed to the choir to be silent as Clara Butt alone sang Abide with me in her incomparable voice. Monitors read the lessons in School chapel, and the reader of the second lesson had to extinguish the candles on either side of the lectern using thumb and first finger. New Monitors were carefully watched by all to see that they did not flinch when doing this.

The School dormitories were lighted by gas, and the Monitor had a candle, protected by a glass cylinder, to carry with him if he had occasion to go round his dormitory after ‘Lights Out’. In the Studies we had only candles to work by until the day came when electricity was installed, and for the first time we had more than enough light to see by.

Does the Cathedral night watchman still come round with his call in the Mint Yard of “Past ten o’clock: a fine and starlit night” (or “a wet and windy night”) “and All’s Well”?

Sir Harry Townend (1891-1976) was at the King’s School from 1905 to 1910. He was a King’s Scholar, a monitor and Colour Sergeant in the OTC. He was an exhibitioner at Queens’ College, Cambridge and had a career in India working for Shaw Wallace & Co. He was a member of the Council of State of India in 1946-7. These reminiscences were published in The Cantuarian in 1967.