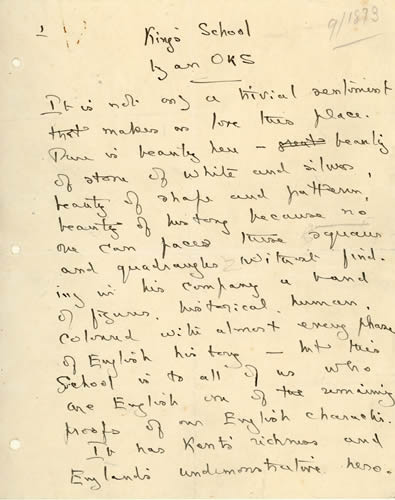 Manuscript of Hugh Walpole, King’s School by an OKS, 1929

Hugh Walpole was at King’s from 1896 to 1898. He was not obviously happy or successful as this letter home shows:

“Dear Father, I am so sorry I had such a bad report. I have really done my best. It is so hard though. I have such a lot of lessons to learn. I am doing scanning, Ovid, decimals and lots of things I’d never done before. I was sixth again last week. I can’t get any higher. I wish I could. But most of the boys have been in the form over a year… Excuse me for writing so badly and shortly. I’m writing with a bent nib and I get smacked when I’m not looking. Please send me my crest-book. Thank you very much for 2/6. The trousers have come. Love to all.”

In later years he came to love the School, returning regularly and becoming a major benefactor. Walpole House was named after him in 1935. He also wrote a short preface for the School Prospectus:

“When, I, now over fifty years of age, look back and see a small, rather frightened boy walking in the morning and considering across the dormitory the pale honey-coloured arch of the old monastery around which the dormitory had been built, I wonder whether that boy could have had anything better to begin his day with. And although you may, as people now do, disregard history, it meant something to me as I struggled with Algebra and Euclid, which I so thoroughly detested, in a room where boys had been working almost without a break for nearly a thousand years. Then there is also the question of beauty. I would be ready to wager that no boy who lives for a number of years under the protecting wing of one of the loveliest cathedrals in the world is likely to be quite unaffected. Something of that grey stone, of those towering pinnacles, of the music and the green lawns and the flowering May will be a gift to him from his parents for all his life after.

“In short, if I had a boy to educate I would send him to King’s School because I would know that there his character would not be flattened out into a common denominator, and that, while he would be taught all the things necessary for him to become a practical man, able to make his way in the world, he would also – almost without knowing it – draw into himself all the richer things. He would learn that history did not begin in August, 1914, and that the monks defending the stately warrior, Becket, were not far from the touch of his hand; that Walter Pater wrote some of the loveliest prose in the English language because he had slept in one of those same dormitories; and that he belongs to an England very old and very faithful to the principles both of beauty and courage.”