When I was a boy at the King’s School, the Scholars wore purple stuff gowns, like a master’s of arts. We did not wear them constantly, but only when attending church in Lent, and on the speech days and when the Archbishop was in residence. Dr. Birt, to flatter Dean Andrews who had been of Westminster school, introduced the black cloth gown and breeches and caps, wishing to adopt the Westminster habits and customs.

Of my masters Christopher Naylor and John Francis, I can say that I revered and feared the formed, and loved the latter. Naylor was a good scholar and apt at latin versification. This he taught me admirably. He could not teach me greek Metres, which I longed to understand and had never read Porson’s preface to Hecuba. He was very dignified in appearance. Francis grounded me admirably in Latin. His method was excellent, and under him I acquired a knowledge of Lilly’s Grammar. He had much wit and humor and often said odd things. There is a passage about Lucian which (I d o not recollect it perfectly) expresses his character as a Teacher.

“There was,” as an old Etonian said of Dr. Goodall Master and afterwards Provost of Eton “a pleasant joyousness in him.”

Old scholars do not admire changes in the management of the School in which they were educated, yet calm reflection should teach them that there may be progress and beneficial progress in the modes of communicating Instruction. Tho’ I for one maintain the importance of a sound instruction in Greek and Latin, I fully acknowledge the advantage of imparting to boys an acquaintance with modern languages and teaching them Euclid and Algebra. In my school days we could learn French privately as several did, and a master to teach writing and arithmetic attended for an hour daily. Mathematics formed no part of the System, tho’ we could find instructors unconnected with the School. For French I sought the aid of Monsieur Miette, one of the French Refugee Congregation.

For Mathematics I enjoyed the instruction of that benevolent man Rev. Henry Hutchesson who was well able to teach Euclid, Algebra Trigonometry etc. and in all the books edited by Dr. Wood of St. Johns and Viner. With him Bishop Broughton and Charles Plater and myself read successively for several months by advice or Rev. John Francis our Under Master but without Rev. C. Naylor’s knowledge.

The Rev. Christopher Naylor was a dignified looking man but with much severity of aspect and disposition. He was a good Scholar and clever in composition of Latin Verses. I owe much to him in this respect. I was anxious to understand Greek Meters, but he always waved the subject except as to Hex and Pen and Greek epigrams. I suspect he had never read Porson’s preface to Hecuba. I stood in great awe of him till I became head of the first class and then I found him not unpleasant to work with. I read with him Ovid’s Met. Virgil fully, Horace, Juvenal, Cicero’s Orations, Etc. Xenophon and Homer and several Plays. The rod was his great dependance on all boys but those in first class. No cane was all owed. He died in harness aged 75. I respected him, but did not love him

The Rev. John Francis was Under Master. He had not the Reputation of being a deep Scholar. But he grounded boys admirably in Latin Grammar thro’ the accidence, Propria quae maribus. Quae genus, As in praesenti and Syntax etc. We read Selectae e veteri Test, Phaedrus, and Justin with him. We had no exercise book but Clarke. Yet he previously taught us to write out nouns and adjectives and to compare the latter and to write out conjugations and moods in a peculiar manner, which afforded wonderful facility as we advanced in the School. He was very kind to me and gave me valuable advice when I had come to the head of the School. I shall never forget his kindness in this respect. In Professor Connington’s lectures I have read how Students should read Virgil. It was the very method practised in Canterbury School.

Mr. Francis held a six preachership and was rector of S. Mildreds and had a small Country living (Willesborough) near Ashford. He had too the Sin Rec of Orgasswick in Romney Marsh. He was an excellent preacher and a fair ecclesiastical Lawyer. His Father was Fellow and Tutor of Pembroke Hall, and Rector of Soham, whereas Naylor’s father was said to have been a Vetenary Surgeon and the boys said his coat of arms was three horse shoes, with the motto “Latin Grammar – {Nayl-or / Nail-or hammer.” He had a living in Lincolnshire and was latterly a six preacher. In early life he had Lord Arden and Spenser Perceval as pupils. His eldest daughter Mrs. Burrard was very like Mrs. Siddons.

There were two speech days at the School. The first was on the Festival of the Ascension, the second on the School Feast day. On the first of these the Dean or V. Dean and Canons – perhaps 2 or 3 came to the School after Morning Service and an arm chair from Mr. Naylor’s parlour was placed for the Dean and 3 or 4 plain chairs adjacent across from the fire place and looking towards the east end. Then the 3 Senior Boys recited 3 speeches selected from Livy or Quintius Curtius in order standing in the Head Master’s desk. The Dean or V. Dean said a few words of Commendation and requested a holiday from that hour till afternoon service on the next Saturday. The School Feast day was of uncertain date; but usually in September. It was on a Thursday and we had the same holiday and the same form after service tho’ eight or nine old scholars and two or three friends of the boys or Masters attended. One speech only was made by the Senior boy, or if he had spoken on the previous year, by the next in seniority. I prompted both Knott and Plater in 1814 and 1815, having myself spoken in 1813. The speech was in Latin composed (as supposed) by the Master and was on some such topic as “De usu eloquentiae.” Mr. Naylor had a collection of such speeches handed down, I suspect, to him and Mrs. Legrand gave them to his successor Dr. Birt. The speaker had 2 guineas from the School Feast Fund to purchase a book. The preacher, was, if one could be found, an old King’s Scholar lately ordained. If no one was ready the Head Master preached. Dean Horne had once preached and so Dean Andrewes was induced to preach. 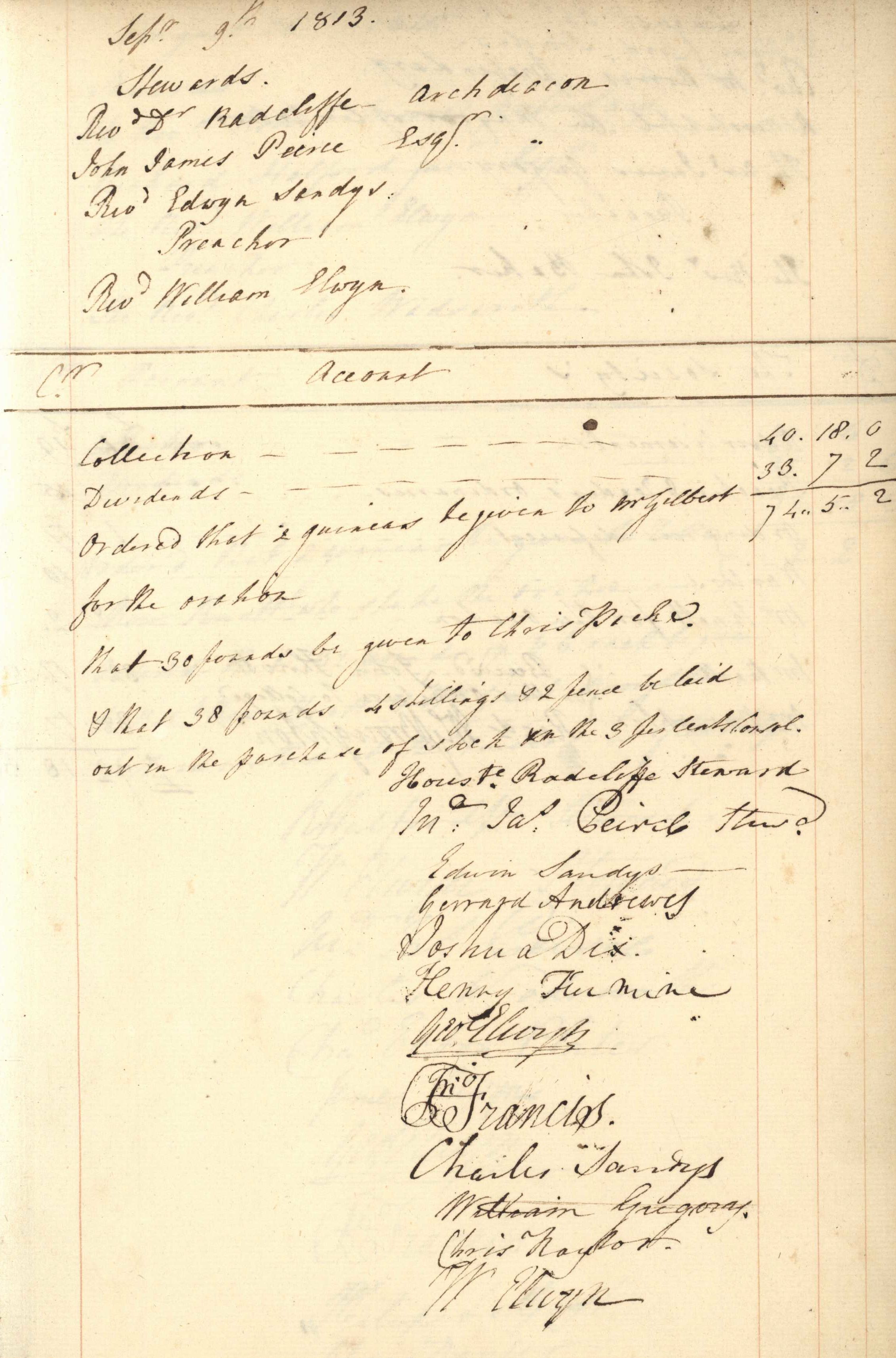 Feast Society Accounts 1813: Ordered that 2 guineas be given to Mr Gilbert for the oration. Dean Gerrard Andrewes, Headmaster Christopher Naylor and Lower Master John Francis are among the signatories.

In 1819 Broughton preached from the text “Seek that ye may excel to the edifying of the Church.” It was I believe, the Centenary of the Society and I dined for the first time at the Fountain with the Society. I dined again in 1822 when I was preacher; and then many years passed for I was absent till 1851. I managed again in 1860 to be present. At the Centenary Lord Tenterden was present and his son. I sat next to his son and Mr. Crotch son of Dr. Crotch. Lord Tenterden was so overpowered that he could not make a speech but amid floods of tears could only say “I thank you, I thank you, I am unable to s peak,” when his health was proposed. I recollect that several of the old scholars, old men, assembled before service in the School Room among them Mr. Harvey of S. Laurence, Martin Benson of Tunbridge, and Mr. Boteler of Eastry. The latter (Mr. B.) produced one of the weekly lists of Absentees kept from his school days. We called that List “The Absenses.”

On second thoughts I doubt whether Broughton preached then or in 1818. I heard the sermons in 1820, 1819, 1818, 1817, 1816, after I left school, and Bishop Broughton, Dr. Birt and Dean Andrewes preached three of them. I recollect Edwin Sandys, Turmin of Minster in Sheppy, Wm. Elwyn and C. Packe being preachers. Mr. Naylor held a small living in Lincolnshire. I forget the name. It was near Spilsby. He went down and read in etc. but did not again visit it, being content to receive the income. His son George, who afterwards held a living in Essex, bad an intimate friend at the University who was patron of this living. It became vacant while they were undergraduates, and the Patron friend presented it to George’s father to hold for George ’till he should be in priest’s orders. In the interim the said Patron died, and it being understood that the new Patron would not present George, if his father resigned it, Mr. Naylor did not resign but retained possession ’till his death.

All people, clergy and laity, frequented the Theatre in those days. The King’s Scholars always bespoke a play, and begged their friends and others to take tickets. It was considered good fun to go round to the ladies schools to solicit their patronage, especially to one old puritan lady, a Miss Drake who wore a large Turban, and dismissed the applicants severely. 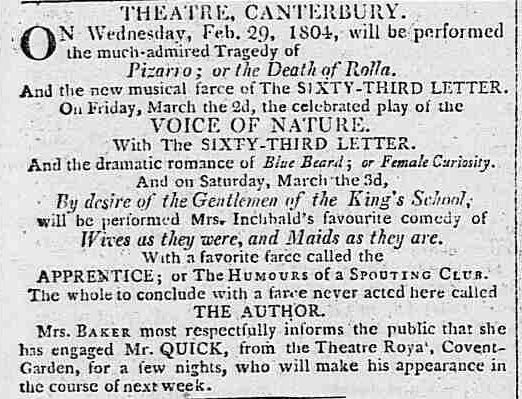 Canterbury Theatre 1804: By desire of the Gentlemen of the King’s School

Lord Tenterden (Chief Justice) was born in the House near West entrance of the Cathedral and was educated at the King’s School. One of his school fellows (Mr. Strouts of S. Dunstan’s) told me that he was called by the nick-name of “Seedy Cucumber” from a liking he had for that vegetable. He was present with his son at School Feast Dinner in 1819. He must have felt what Gibbon says of Pope Urban 2d. He “had illustrated his family and province; nor is there perhaps a more exquisite gratification than to revisit, in a conspicuous dignity, the humble and laborious scenes of our Youth.”

George Gilbert (1796-1874) was at King’s from 1809 to 1815 and was Captain of School. He went to Corpus Christi College, Cambridge and was ordained. He was Second Master at Grantham Grammar School from 1820 to 1851 and Vicar of Syston, Lincolnshire. He was a King’s School benefactor, remembered now in the Gilbert and Shepherd Gift. His portrait is in the Gilbert Room at St Augustine’s. His reminiscences ‘Horae Cantuarienses’ are in the Cathedral Library. They were edited and published in a small edition by Headmaster John Shirley in 1938.