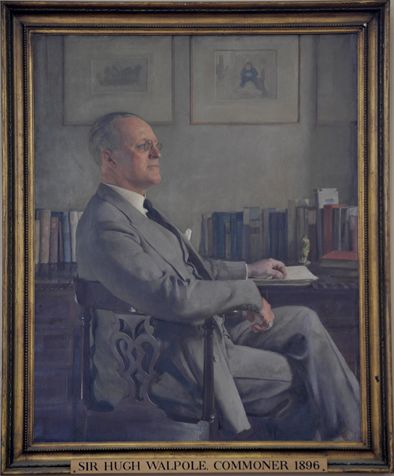 The Commemoration of Benefactors service in the Cathedral on Speech Day opens with a prayer giving thanks for “the advantages afforded in this place by the munificence of founders and benefactors”. The following are remembered by name:

Archbishops Augustine and Theodore are regarded as the founders of the educational ancestor of the King’s School in Canterbury. Their benefactions, if any, are safely lost in the mists of time.

Archbishop Thomas Cranmer had considerable influence over the Cathedral Statutes of 1541 establishing the new Grammar School and the King’s Scholars. It is probably thanks to him that there is a reference to the scholars as “fifty poor boys… destitute of the help of friends”.

Reginald, Cardinal Pole (1500-58) is a key figure in the history of the School. His bequest of the Mint Yard gave the young establishment a new home. There is a portrait of him in the Shirley Hall and his coat of arms is over the main entrance of the Grange.

Matthew Parker, Archbishop of Canterbury, took a close interest in the School. The Parker Scholarships for King’s School boys to Corpus Christi College, Cambridge continued until the late twentieth century and had a significant effect on the careers of numerous OKS, including Christopher Marlowe. His coat of arms is above the Palace Court entrance to the Grange.

Robert Rose (KS at least 1560-62) was later Lower Master from 1572 to 1585. His leaving gift – for those going to University – gave preference to local boys and is still awarded.

William Heyman (possibly a Commoner in the 1560s) founded a scholarship in 1625 for poor boys to be placed at the King’s School. Descendants of his grandfather Peter Heyman were the main beneficiaries. The scholarship still exists but the value is now very small.

George Stanhope was Dean of Canterbury in the early eighteenth century. In his will of 1728 he established an exhibition to Cambridge. It is still awarded.

George Shepherd (KS 1780-82) was later a Fellow of University College, Oxford. He left money for a leaving exhibition in 1849. This is now amalgamated with the Gilbert award.

James Ford (KS 1788-94) is best remembered in the Ford Lectureship at Oxford. His will in 1850 also established studentships for King’s School boys at Trinity College, Oxford. These ended when closed awards were abolished.

Anne Bunce was the widow of John Bowes Bunce (KS 1786-92), who had been Vicar of St Dunstan’s and Master of the Eastbridge Hospital. Under her will in 1865 an exhibition to University was established. It is still awarded. There is a memorial to the Bunces in St Dunstan’s Church.

George Gilbert (KS 1809-14) who became Vicar of Syston and was Lower Master of Grantham Grammar School bequeathed a leaving gift in 1874. It is now amalgamated with the Shepherd award to form the Gilbert & Shepherd Gift. The Gilbert Room at St Augustine’s is named after him and his portrait is there.

George Knox Anderson established the Anderson Gift in 1918 in memory of his son Donald Knox Anderson (KS 1899-1904), who was killed in the First World War. It is still awarded to a leaver entering the services.

Percy Janson established a Scholarship in 1919 in memory of his nephew William Janson Potts (KS 1910-13), who had been killed in action in 1917. It was for boys in needy circumstances.

Thomas Field (KS 1867-73) was Headmaster from 1886 to 1896. He was later Warden of Radley College and Canon of Southwell. He became the first President of the OKS Association in 1928. He bequeathed property (including houses in Broad Street) and funds to the School in 1936. The Field Classrooms are named after him, as was the former Field Pavilion on Birley’s. His portrait is in the Shirley Hall.

Sir Edmund Davis was a successful mining financier in Southern Africa who lived at Chilham Castle from 1918. He established a leaving exhibition to the Middlesex Hospital in 1928 and under his will in 1939 set up Scholarships “tenable for two years, reserved for boys nearing the end of their school career, intending to study either medicine or music, and who are in need of financial help”.

Sir Hugh Walpole (KS 1896-98) took a close interest in the school for many years. His generosity included the turfing of the Mint Yard and the establishment of a Walpole Prize. The Walpole Collection of literary manuscripts and fine books is of outstanding quality. Walpole House is named after him. There are portraits of him in the Walpole Room and in the Shirley Hall.

Algernon Latter (KS 1879-89) devoted his life to King’s. He was Headmaster of the Junior King’s School from 1908 to 1916 and of the Senior School from 1916 to 1927. He was later President of the OKS Association. He died in 1944 and left a bequest to the School. Lattergate is named after him, as was ‘Algy’s’ when that was part of The Grange. His portrait is in the Shirley Hall.

Gerard Moore Mason (KS 1867-75) was one of four brothers at King’s and became a clergyman. Under a major bequest in 1944, the Christina Mason Scholarship was founded in memory of his wife.

William Baron Plender was a senior partner in the accountants Deloitte, Plender, Griffiths & Co. and a King’s School Governor. His will in 1946 provided a legacy that could be used “to provide financial assistance to needy scholars”. Plender House, a former waiting house in the London Road, was named after him.

Sir Arthur Coryndon Fairfax Luxmoore (KS 1889-93) was a distinguished lawyer who became Lord Justice of Appeal. He was President of the OKS Association and a leading figure on the Governing Body. The Luxmoore Challenge Trophy used to be awarded to the best house. Luxmoore House is named after him.

Charles Stuart Crawford (KS 1882-85) ran a coffee estate in Mysore. He established a leaving exhibition to medical school in 1944. It is still awarded.

Sir Charles Armstrong (KS 1876-78), who was a leading figure in the commercial life of Bombay, left money for a scholarship in 1949.

Louisa Kate Cannon was the widow of Thomas Cannon (KS 1871-75). Her gift in 1939 established a Scholarship in his memory. She died in 1948. Her portrait is in the Shirley Hall.

Ethel Alice, Lady Blenkinsop was the widow of Major-General Sir Layton Blenkinsop (KS 1874-79), sometime Director General of the Army Veterinary Service. A Scholarship “for Mathematics” was established in his memory.

William Loftus Carlton Crawford established Scholarships in 1955 in memory of his brother Charles Stuart Crawford (KS 1882-85) who had died in 1948.

Violet Georgina, Viscountess Milner was the widow of Alfred, Viscount Milner. She gave Sturry Court to the School, and this became the centre of the Junior King’s School when it moved from the Precincts in 1929.

Christopher Peter McCurdy (KS 1951-56) died young in 1960. The McCurdy Exhibitions to Oxford University, established under his will, are among the most valuable leaving exhibitions still awarded.

William Somerset Maugham (KS 1885-90) was later a School Governor. His many benefactions included a short-lived Maugham Scholarship for a poor boy to come to the King’s School, a boat house, furniture and works of art. He also gave many of his books, and built the Maugham Library to house them. He is buried in the Galpin’s garden. His portrait is in the Shirley Hall.

John Shirley was Headmaster from 1935 to 1962. He forewent his salary as Headmaster, living on his pay as a Canon. He was largely responsible for reviving the fortunes and reputation of the School. The Shirley Hall is named after him and there is a portrait of him there.

Frederick Ernest Cleary (1905-84) founded a property company that developed old buildings in the City of London. His generosity enabled the School to use Blackfriars as an Art School. There are Cleary Art Scholarships and the Cleary Gallery at Blackfriars is named after him. He also gave six lime trees on the Green Court.

Calvin Hoffman was an American press agent and writer who believed that Christopher Marlowe wrote the plays attributed to Shakespeare. His bequest in 1987 established a Hoffman Scholarship for a student of English Literature as well as the Hoffman Prize for scholarly work on Marlowe. The gift also remembers his wife Rose Hoffman.

Douglas John Bourne Jervis (KS 1916-23) was a loyal OKS. He was Secretary, Treasurer and President of the OKS Association and a School Governor. On the death of his sister Norah Elizabeth Jervis their estate came to the School. This bequest helped finance Jervis House.

John Corner taught at King’s from 1933 to 1940 and from 1946 to 1955. He was Housemaster of The Grange, Marlowe and Walpole and was later Headmaster of the RAF Benevolent School. The John Corner Music Scholarships established in 1995 are for choristers from four choir schools.

Esmé Henrietta Chafy, who died in 2001, was the last survivor of the Chafy family. Her ancestors included a late eighteenth century Lower Master. The Chafy Scholarship established under her bequest is for sons and daughters of Anglican clergy. She also gave the School some fine furniture. There is a portrait of her in the Shirley Hall.

Michael Herbert (KS 1947-53) was Head of School House and Captain of Cricket. He was a Governor, President of the OKS Association and founding Chairman of the Legacy Club. He died in 2006 and a major legacy came to the School on the death of his wife Vibeke Herbert in 2011. The new Music School at Junior King’s is named after them.

Robert Baynes Horton (KS 1952-57) was a Governor and Chairman of the Legacy Club. A major bequest came to the School on his death in 2011.

David Goodes taught at King’s from 1950 to 1986. He was housemaster of Riversleigh, ran the Boat Club for 21 years, played the viola in the school orchestra, and conducted the Second Orchestra and the Chamber Orchestra. A bequest for Music Scholarships came on his death in 2018.