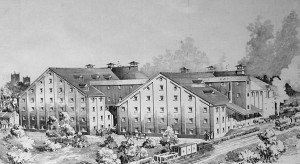 The Malthouse was built in 1898 for Mackeson’s, the brewers of Hythe. It was deliberately next to the railway and had its own siding. In 1929 Mackeson’s was taken over by Whitbread’s, and when the malthouse finally closed, Barrett’s the local car sales firm bought the building in 1966.

The School acquired the Malthouse site in 2012. The malthouse building was converted into a theatre, a new International College was built and a shed was converted into a sports hall.  The site was in use from April 2019 and officially opened by Paul Barrett and Joanna Lumley in November 2019.