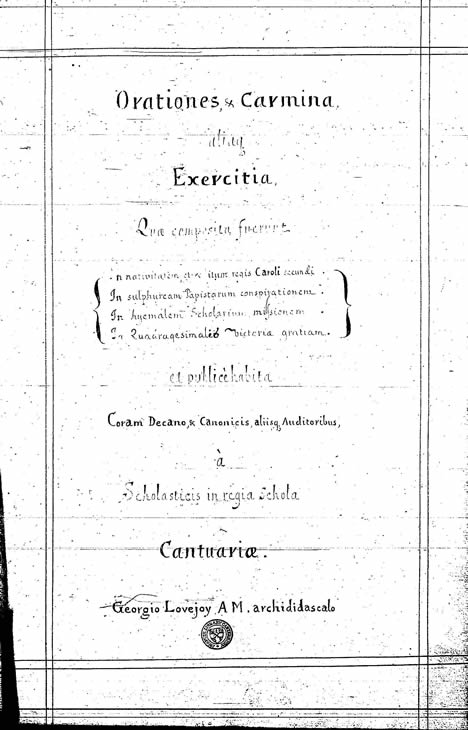 After the Interregnum, for which no records survive, the Restoration saw a dramatic efflorescence under George Lovejoy (Headmaster 1665-84). His ‘Book of Speeches’ (now in the Cathedral Archives: Lit MS E41, illustrated here) provides a full record of the Speech Day performances.

There were four Speech Days during the year: 5 November (Guy Fawkes Day): Gunpowder Plot plays; Christmas: at the breaking-up of school; Lent; and Oak Apple Day (29 March): celebrating the Restoration of Charles II.

Many of the plays were composed by the Headmaster and the boys, and included references to current affairs or to conditions in the School, but works by writers such as James Shirley were also produced.

It would appear, however, that not everyone approved. Towards the end of Lovejoy’s regime, the Chapter drew up new regulations for the School. The final item read: ‘No playes to be acted in the schoole unless first seene and allowed by the Deane…’

The Orationes Project, headed by Anthony Johnson, is a major research programme investigating many aspects of the performances. An on-line version is in preparation: a preview can be viewed here: Digital Orationes. An edition of five of these plays will be published soon.