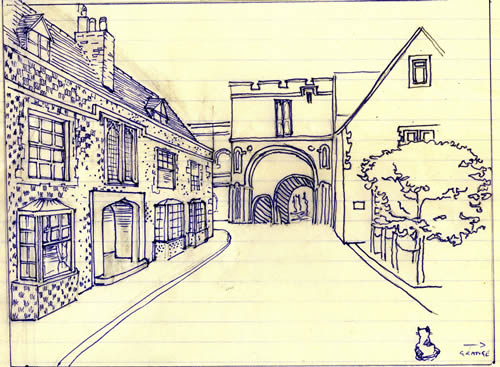 One of Patrick Leigh Fermor’s designs for Mitchinson’s House 1979; his own house, The Grange, is on the right

Patrick Leigh Fermor was in The Grange from 1929 to 1931. In the ‘introductory letter’ to A Time of Gifts (1977) he describes his schooldays, his friendship with Alan Watts, the world of the Precincts and his extramural romance.

“Copious reading about the Dark and the Middle Ages had floridly coloured my views of the past; and the King’s School, Canterbury touched off emotions which were sharply opposed to those of Somerset Maugham in the same surroundings; they were closer to Walter Pater’s seventy years earlier, and probably identical, I liked to think, with those of Christopher Marlowe earlier still. I couldn’t get over the fact that the school had been founded at the very beginning of Anglo-Saxon Christianity – before the sixth century was out, that is: fragments of Thor and Woden had hardly stopped smouldering in the Kentish woods: the oldest part of the buildings was modern by these standards, dating only from a few decades after the Normans landed.

“There was a wonderfully cobwebbed feeling about this dizzy and intoxicating antiquity – an ambiance both haughty and obscure which turned famous seats of learning, founded eight hundred or a thousand years later, into gaudy mushrooms and seemed to invest these hoarier precincts, together with the wide green expanses beyond them, the huge elms, the Dark Entry, and the ruined arches and the cloisters – and, while I was about it, the booming and jackdaw-crowed pinnacles of the great Angevin cathedral itself, and the ghost of St. Thomas à Becket and the Black Prince’s bones – with an aura of nearly pre-historic myth.”

In later years he returned to Canterbury on several occasions, the last to open the New Grange in 2007.